What advisors should expect from women investors

Whenever advisors talk about a powerful new generation of investors, the assumption is they’re referring to millennials. In fact, the “new” investors that will have the greatest impact on financial wealth in Canada in the near term are not millennials, but rather women. Yes ... women.

Women are the biggest emerging market in the history of the planet.
Newsweek, 2010 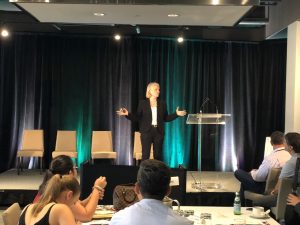 I was delighted to give the Closing Keynote talk at the Advisor’s Edge “Be a Better Advisor” event.  In my presentation, I talked about why it’s so important for advisors to connect with this powerful new group of women clients.

Over the next decade, a massive amount of wealth is going to be managed by women of all ages. By 2026, women will control almost 50% of all financial wealth in Canada.  Currently, Canadian women currently control $2.2 trillion of assets. By 2028 that will almost double to $4 trillion – and with real estate included it could be far greater (according to a recent CIBC Economics report, The Changing Landscape of Women's Wealth.)

Not only will they need to manage the money they earn themselves, they'll ultimately benefit more than men from the massive transfer of wealth on the horizon. They typically inherit money at least twice in their lifetimes ... from their parents, and through divorce or being widowed.

Don’t overlook the role of daughters

My friend Barbara Stewart, an expert on the issue of women and finance, wrote about daughters as the rising wealth influencers. She pointed out that women are more likely to be the caregivers to elderly parents than sons. Let’s call this daughter care. Women provide nearly 2/3 of the care for their aging parents and even their in-laws – in fact, they are 28% more likely to care for a parent than sons.

Elder care includes elderly parents or in-laws handing over investment responsibility to someone else, usually daughters. And, thanks to wealth transfer and people living longer lives, investing will become a larger and larger part of daughter care.

So we’re not just witnessing a transfer of vast amounts of wealth to women, but also a transfer of crucial authority and influence over wealth. For advisors looking to grow their practice (and retain valuable clients), women are the demographic with the greatest potential in the immediate future.

Implications for relationships with women clients

As a result of the continuing wealth transfer and the surge in daughter care, we will see a shift from a male-centric to a female-centric investing environment. As an advisor, you not only want to build relationships with your women clients, but also keep your clients’ daughters on your radar.

In addition, approximately 80% of an advisor’s existing clients in managed relationships are couples. Often, one person in the couple relationship will take the lead in client meetings. It’s important as an advisor to endeavor to include both partners in your conversations, particularly the women.

You want to build relationships with these women clients as one day they may be the ones controlling the assets and making the decisions. You want to increase the likelihood that they’ll stick with you if anything happens to their partner.

Women, unlike men, aren’t interested in amassing money for its own sake ... they’re interested in what the money is for, what diﬀerence it will make, and what joy it will bring to others.
Gail Blanke, motivational speaker and author, June 2017

Talk to women differently about money

Now I recognize that talking about the gender differences between investors is a vast generalization. But in general, women and men tend to look for different types of information about their investments. Here are some things to keep in mind:

Advisors who want to to benefit from the impending wealth shift to women are wise to incorporate a more female-centric approach into their practices now. Look to build stronger relationships with your women clients by focusing on their goals and talking to what matters to them. And don't forget about their daughters!

Get our fascinating blogs and news delivered right to your inbox.We respect your privacy at PureFacts, so you can unsubscribe at any time.

Women investors: how this powerful new generation will impact wealth