Many of us kick off the New Year with a list of resolutions we feel are reasonably attainable. While that’s great, what about reaching farther and setting some goals we’d love to achieve … even if we’re not sure how?

Robert Madej, President & CEO of PureFacts, is pretty fearless when it comes to setting ambitious goals … both for the firm and for himself personally. Rob was recently profiled in The Cambridge Club’s Living Well magazine about how he’s achieving his latest and most challenging goal to date of running 12 marathons in a year, one each month.

Rob has always loved to set goals; every year on his birthday he sets a new goal for himself and he’s a big fan of New Year’s resolutions. 10 years ago, when he turned 40, Rob entered into a 50-mile race in Haliburton. This race was meant to be a great way to spend his time and would encourage him to continue to exercise as if he were younger – but, little did he know, that was only the beginning. 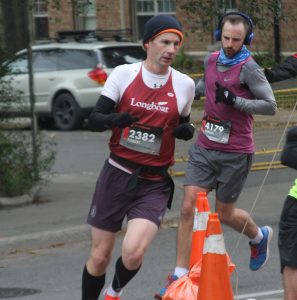 So, this year, as he neared his 50th birthday, he wanted to set a fun goal for himself – one that would nod towards the fact that he’s getting older but make it clear that he doesn’t feel like it – thus, the idea of completing 12 marathons this year, one each month, was born. The marathon journey began on September 30th when Rob tackled the Wineglass Marathon in Corning, NY. Here, Rob finished 17th overall out of 1,674 runners, completing the marathon in 2:50:52.

Rob followed up this performance with the Scotiabank Toronto Waterfront Marathon (STWM), which he ran on October 21st – just 3 weeks after his first marathon. The STWM is the official World Masters Marathon Championships (for those age 40+), bringing in runners from around the globe. Rob completed the STWM in 2:49:03, placing 90th overall out of 4,474 participants, and 2nd in his age group of 50-54. His time resulted in him finishing in an astounding 15th overall place in the World Masters Marathon Championships. In November, he ran in the Hamilton Marathon and ended up in 15th place with a time of 2:53:55.

What’s most telling about these performances is that Rob’s finishes at the Wineglass Marathon and STWM are the fastest marathons he’s ever completed – and he’s been running since he was just a kid. He is 50…and just getting faster! But Rob isn’t focused on his finishing times, he’s using these marathons to stay healthy, manage his stress levels, and have fun.

While he began running when he was young, Rob hasn’t always maintained his healthy lifestyle. After beginning his own company, Rob was working 70 – 90 hours/week and simply didn’t have (or make) the time for his fitness. But, after 6 years, he found himself at his heaviest weight and realized it was time to make a change, so he started running again and set the goal of qualifying for the Boston Marathon (a feat which he accomplished for the first time 13 years ago) – we told you, he loves to set goals! And he hasn’t really stopped running since.

For most of us, the real challenge of sticking with a goal like this is that we simply don’t have the motivation to do it – but that’s not a problem for Rob. Running offers him the alone time that he needs and loves; he even explained that he’s much happier on days when he runs back and forth to work, approximately 8kms, than he is on days he hops on the TTC for the commute.

But somedays he needs some extra motivation, and that’s when he turns to the team at the Cambridge Club. Not only do the trainers provide him with some extra motivation, but he’s also inspired by longtime members who are always in the Club working out and are dedicated to their personal fitness. And while Rob’s been training for these marathons, he’s found a running buddy in the Cambridge Club’s squash pro Tyler Hamilton. Tyler and Rob have met up and run for 15-20kms, with Tyler pushing Rob to reach and maintain a faster pace.

It might seem a bit strange, but this year, Rob is running a bit less than he normally would. The reason for this is that the week after a marathon, Rob’s focused on his recovery; and the week before his marathon, he’s not training as much. He figures that by the time he celebrates his 51st birthday, he’ll have run 4400kms – in comparison, he would normally run 5000 – 6000kms in a calendar year, but while he’ll have run less distance, he’s running at a much faster pace.

And, just in case you don’t think running 12 marathons in a year was enough, Rob is also very focused on other body exercises including plank and pushups (Rob does approximately 150 pushups each day). He believes this work, as well as additional strength training, has helped with his running and is definitely helping him to lead a healthier life.

At this time of year, we all find ourselves setting goals for the year to come. Sometimes we fear if we set the bar too high we simply won’t be able to reach it, but this year we’re throwing that out the window. If Rob can teach us anything, it’s that we’re never too old (or too young) to set an ambitious goal for ourselves!

Source: As published in Living Well by The Cambridge Club

Get our fascinating blogs and news delivered right to your inbox.We respect your privacy at PureFacts, so you can unsubscribe at any time.

Reflecting Back and Looking Forward: 2021 in Review